In this article, Ross Hauser, MD explains problems of Snapping Hip Syndrome and how non-surgical interventions such as Prolotherapy.

Snapping is a form of crepitus, the medical term for any audible noise or internal sensation of popping, grinding, clicking or “snapping” in a joint.

Crepitus is not a normal condition and signs of it point an injury or degenerative joint condition.

In the 2018 publication, Stat Pearls, doctors describe Snapping Hip Syndrome in this way:

In research from doctors in Poland, a detailed analysis of the diagnosis and determination of Snapping Hip Syndrome is given. Here is the summary of that research:

There are two main forms of snapping hip: extra or intraarticular.

Since snapping hip syndrome is commonly seen among athletes, the typical approach is to blame it on overtraining and tight muscles and tendons. As such, it involves at least part of the RICE protocol, which includes rest, ice, compression and elevation.

Although some of these treatment components do indeed help with muscle injuries, they do not heal heal the soft tissue involved such as the ligaments, tendons, and hip labrum.

In addition, athletes must also stop training immediately, advice that is rarely popular, and when ligament laxity is involved, not even necessary for very long.

Another standard practice involves the use of steroids and anti-inflammatory medications. However, in the long run, these treatments do more damage than good. Although cortisone shots and anti-inflammatory drugs have been shown to produce short-term pain benefit, both result in long-term loss of function and even more chronic pain by actually inhibiting the healing process of soft tissues and accelerating cartilage degeneration. Long-term side effects of these drugs can lead to other systemic health concerns.

When all else fails, patients who experience chronic snapping hip syndrome may be referred to a surgeon in order to lengthen the “tight” tendons thought to be involved. Unfortunately, surgery often makes the problem worse. Surgeons will use x-ray technology as a diagnostic tool, which does not always properly diagnose the pain source.

Treating the Iliotibial Band (IT Band) and iliopsoas tendon

Snapping hip syndrome involving the iliotibial band, or IT band.

Snapping hip syndrome involving involves a tear in the hip cartilage or bone debris in the hip joint (loose bodies). This type of snapping hip usually causes pain and may be disabling. In addition, a loose piece of cartilage can cause the hip to catch or lock up.

Doctors from the National Tawain University Hospital presented a case of snapping hip syndrome in regards to gluteus medius and minimus tendon problems and dextrose prolotherapy in its treatment.(3)

A 37-year-old male started to complain of right lateral hip pain after he had initiated weight training half a year ago. The physical examination revealed tenderness near the greater trochanteric region with a reproducible and palpable snapping during hip flexion and extension.

The ultrasound examination showed swelling and hypoechogenicity (a clear immune response to injury) in the gluteus medius tendon at its insertion (enthesis) on the lateral facet of the greater trochanter. The overlying iliotibial band appeared normal. In the short-axis view, a snapping was clearly visualized when the iliotibial band glided over the swollen gluteus medius tendon during hip flexion and extension.

The doctors also reported that they did not use corticosteroid due to its weak benefit in treating chronic tendinopathy and its detrimental effect on tendon healing. 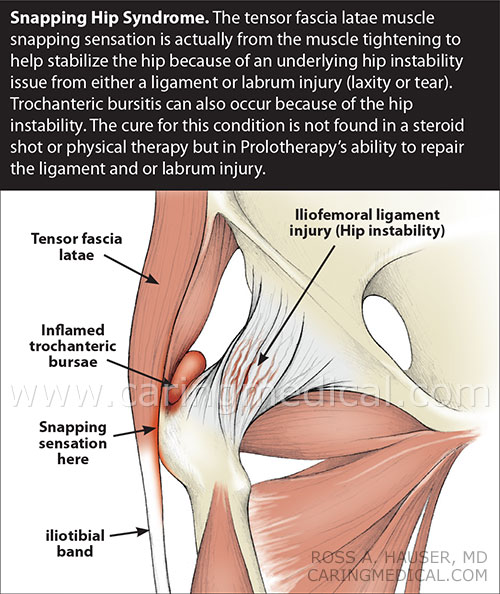 Prolotherapy for snapping hip syndrome gets at the root cause of the problem, damaged connective tissues like tendons and ligaments. The abnormal movement of these connective tissues rubbing over bony parts of the pelvis is due to these structures becoming lax or loose from repetitive use like in dance or sports or from a traumatic incident like a fall. The dextrose in the Prolotherapy solution, when injected around the injury, causes a mild inflammatory response, mimicking what the body does naturally in response to soft-tissue injuries. The immune system is drawn to the area of injury and immune cells and platelets release growth factors to build new healthy tissue.  The ligaments and tendons become thicker and stronger from this inflammatory reponse, proven decades ago in rabbit studies. When they do, the laxity or looseness of these structures is resolved and the snapping and pain goes away.

The intra-articular causes of snapping hip are usually more serious. But a Prolotherapy doctor, a specialist in this regenerative injection therapy like our team, can determine if Prolotherapy or surgery is called for. Loose bodies, usually bone or cartilage fragments, sometimes do have to be surgically removed if they are rubbing on other structures causing pain. If one has a tear of the labrum, a specialized structure/tissue that covers the joint capsules of hips and shoulders, it can cause pain and snapping. Then the doctor may have to use slightly more advanced techniques to resolve the problem. Platelet-rich plasma (PRP) is a type of Prolotherapy that uses a patient’s own blood, from which the platelets and their large concentrations of growth factors are used as part of the Prolotherapy solution. Labral tears usually respond well to PRP.

Degenerative joint disease, or osteoarthritis, (OA) is the long-term result/worst-case scenario of what initially begins as a minor injury like snapping hip syndrome. If your IT band or iliopsoas tendon becomes chronically lax, meaning your snapping hip does not stop snapping in six months or so, it can lead to OA. OA is nothing more than cartilage loss with associated boney overgrowth. We all lose cartilage, the cushion between the bones of the joint so they can feely glide over one another, at varying rates. If we eat and exercise properly and keep our weight down, cartilage is made to last a lifetime. But when there are lax tendons and ligaments allowing abnormal motion, the cartilage wears out much more quickly. If these extra-articular problems are addressed in a timely manner, then the arthritic intra-articular problem is arrested. When caught early, normal dextrose Prolotherapy can help repair this cartilage damage.

More severe cases, where x-rays and MRI’s show bone-on-bone, or basically no cartilage, then more sophisticated Prolotherapy may be needed. Here at Caring Medical we are doing what is called stem cell injection therapy for these severe cases. Bone marrow contains stems cells and growth factors. These stem cells can and do differentiate into the types of tissue that need to be regenerated, like cartilage. Much more info can be found on our website at caringmedical.com regarding BMP and all the other treatment modalities we have available for painful joint conditions. Dr. Hauser is considered the leading expert in the field of Prolotherapy and we literally have patients from all over the world come to Oak Park, IL to take advantage of his 18+ years of experience in regenerative injection medicine.